This post is meant as a follow-on for part 2 and documents some of the differences that I encountered trying to give control of simulation stepping to ROS-based code itself.  Since ROS and Gazebo are technically separate, I was trying to find a way to create a ROS piece of code to communicate with the Gazebo plugin that I’d been using to step the simulation.  After quite a bit of reading, it appears that it may not be possible, or simply prohibitively difficult.  Therefore, this blog post documents an alternate solution that I plan to use in the blog posts and code going forward.  Code for this blog post can be found here

Rather than employ the gazebo plugin from previous entries, all code now resides in one C++ file.  We’ll declare both a ROS node to get the simulation time and report it to the terminal and also a gazebo node to actually handle the stepping of the simulation.  Note: There are a few changes to the launch file in this example too so please use the accompanying world_step.launch rather than the version from previous posts.

The primary file to look at is /src/world_step/ros_get_world_time.cpp:

As you can see from the code, we initially setup the gazebo and ROS nodes in lines 19-26.  Lines 28-38 are similar to those of previous examples simply getting the current simulation time and printing it to the terminal.  The main change from previous examples are in lines 40-47.  Instead of waiting on a Gazebo plugin, this code implements the world stepping code directly in the while loop.  The next two lines then simply wait one second before proceeding with stepping.

With this setup, I now plan to use this loop to setup the basic framework for conducting simulations for a set amount of time.

After setting up controlled simulation stepping in a pure Gazebo environment (here), we’ll now move towards integrating the plugin in a ROS-Gazebo simulation.  For this post, the codebase for the plugin is unchanged and only a few lines of code are needed to get this working.  You can find the source for this post here.

Step the World with ROS

The code needed to integrate our plugin from the previous post requires the following insertion/modifications.

Insert the following line into the package.xml file located in src/world_step/ between the export tags:

Add/modify the following lines to your CMakelists.txt located in src/world_step/:

These two changes should be all that’s needed to build the plugin from the previous example, provided you correctly move the world_step.cc file into this project of course.

Launching the environment requires you to build the project using the following:

The enter the following command to start ROS-Gazebo:

If all goes well, you should see something like the image below with the iterations and simulation time corresponding to each other and updating roughly every second of real world time.  In the terminal where you called roslaunch you should see the repeating message “Publishing OnUpdate.” which is printed each time the simulation is stepped. 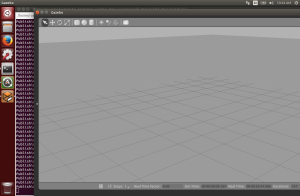 Adding the OnUpdate() call allows for stepping a Gazebo simulation while using ROS as well. The iterations, simulation time, and real time show that the simulation is being stepped once every second of real time.

Now that we can step the world programmatically, the next steps are to integrate logic to start and terminate a simulation after a set amount of time and begin writing the evolutionary framework to launch many simulations.

The Robot Operating System, commonly known as ROS, (http://www.ros.org) is a framework for building robotics software.  Rather than build each robot control system from the ground up, ROS provides a rich software environment with code submitted by many research labs around the world.

Gazebo (http://gazebosim.org/) is a physics simulation environment intended for use in robotics applications.  In addition to dynamics solvers, Gazebo includes functionality to visualize a robot or many robots while also interacting with the simulation through a GUI.

Together, the two software frameworks allow for building robust robotic controllers and simulating their operation while freeing the experimenter from needing to build controller code from the ground up.  The ability to add common controllers such as PIDs and prebuilt sensor packages are very intriguing, but getting started in this world can be a challenge.

Evolutionary robotics adds another layer of complexity to the equation by requiring some perhaps not so common operations while running a simulation.  From what I have seen, ROS is intended to act as a real-time controller for physical robots, and hence works asynchronously with either real or simulated robotics systems.  That is, the controller does not necessarily update at well defined time intervals.  This can be a challenge when doing evolutionary experiments as we want our work to be reproducible.  The next two blog posts describe how to control the update frequency through a Gazebo plugin and then how to use that plugin in a ROS-Gazebo project.

Code for the tutorials/snippets that I describe can be found at the following Github ROS-Gazebo-Examples.

So, without further ado, I will now present the first snippet of test code that I put together to begin working with the two software frameworks.

ROS and Gazebo operate as two separate programs running on a computer and communicate with each other through TCP/IP sockets and message passing.  If left to run on their own, Gazebo will update at whatever rate the system allows given the hardware specifications and ROS will communicate through the sockets.  However, there is no guarantee that communication will occur at any steady rate.  This can make reproducing functionality difficult, if not impossible.

The solution to this problem is to throttle the physics simulation.  Within Gazebo is the concept of plugins that allow a user to insert their own code in a simulation to do many different things.  An overview of plugins can be found here.  I highly recommend reading through that before going through the rest of this post.

Although plugins allow a user to write custom code for a simulation, I could not find a tutorial out there to actually write one that controls the stepping of a simulation.  What’s needed for this is to write a publisher that throttles the rate of an update.  While trying to search for an answer, the closest I found was a tutorial on changing the gravity of a simulation (here) and one for writing custom messages (here).  With these two tutorials, I was able to come up with the basic strategy needed to make a stepping plugin.  First, we need to pause the simulation from the start.  Second, we need to step the simulation after delaying for some set amount of wall clock time.

The code for this example is found in world_step.cc

From the above code, we first establish the plugin specifics in the Load function.  There, we initialize a node and publisher for communicating with Gazebo in lines 20-27.  We add an event listener (lines 31-32) connected to the world update end event to trigger our OnUpdate function each time the simulation updates.  Finally, in lines 50-59, we setup the initial message to publish which pauses the simulation and sends a single step command.

Thereafter, the OnUpdate function is called at the end of an update where we wait 1 second and then step the simulation again.  By changing the value in the sleep function you can change how long between simulation updates.

For now, the code simply steps the simulation after a given time delay.  It may however be advantageous to connect the update to some predetermined events and shut the simulation down after a set amount of time.  Look for those tutorials in future posts.

My next post will cover integrating this plugin within the ROS-Gazebo framework.